The Venezuelan American Endowment for the Arts

in collaboration with the Venezuelan Film Festival 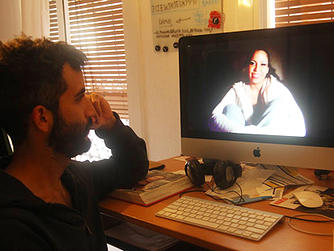 Leo moves to London to work as a full time musician; Edu moves to London too, but soon he has to move to Croatia. Claudia and Santiago get married and are preparing to move to the US. Amalyn goes to Tokyo to try to become a dancer; and Melissa to Australia, where she struggles to raise her daughter with Venezuelan values. Abroad is a collective portrait that explores distance, identity and the day to day lives of Venezuelans living abroad. View Trailer http://www.venezuelanfilmfest.com/#!desde-afuera/cvbp. 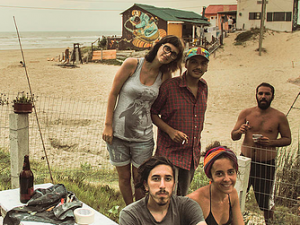 Aguas Dulces: Graffiti in the Coast of Uruguay

From Buenos Aires, a few graffiti artists embark on a summer trip to Aguas Dulces (Sweet Waters), a town on the coast of Uruguay, as part of an artistic residency experiment in which they would live and create together while surrounded by nature; connecting with locals who are held spellbound by such art and expressing their emotions on colorful and joyful works now embedded in this town for good.

To become a Friend of VAEA click here http://vaearts.org/US/support-the-arts.

Johann Pérez Viera: Born in Caracas, Venezuela, he moved to Barcelona (Spain) in 2009, where he graduated from a Master in social documentary at ESCAC. He developed El Veí (25’ 2011), El Cinema Secret (2010) and Happy Day in Barcelona (2009), coproduced with Parallel 40 for channel 33 of Televisió de Catalunya and Televisión Española. His last project, Desde Afuera (Abroad) codirected with Pedro Camacho is his first full length documentary, and it was also his first crowdfunded project, which reached the goal of 6500€ to complete its post-production process.

Pedro Camacho: Born in Venezuela, in 2009 he moved to Buenos Aires to study a Master in documentary filmmaking at the Universidad Del Cine. From 2012 he served as assistant director and second camera to Alison Murray during the filming of her documentary Caprichosos de San Telmo, which premiered at the 36th annual Toronto International Film Festival. In 2013 he codirected with Johann Pérez Viera his first full lenght documentary, Desde Afuera (Abroad), which was financed through crowdfunding, collecting more tan 6000€.

Adriana Berrotán: Venezuelan filmmaker who approaches the lovely job of storytelling in 2007. Since then, their vocation and talent has directed numerous independent projects in different audiovisual genres from music videos, TV commercials, documentaries and feature films. Started as audiovisual production coordinator in 2007, and in the process of learning the trade it generated a connection that would lead her to Dominican Republic to study short films production in the design school Altos de Chavón.

About the Venezuelan Film Festival (VEFFNY)…

VEFFNY, founded by Irene Yibirin, the Venezuelan Film Festival in New York -VEFFNY- previously known as FesNuCive is a carefully curated film festival with the commitment to show the very best of the new Venezuelan cinema to the New York audience -a Window into Venezuela and it’s people trough the lens of the most important directors of this South American country, home of one of the most promising new industries in the region. http://www.venezuelanfilmfest.com/.