The Venezuelan American Endowment for the Arts

is pleased to support the exhibition

“Magdalena Fernandez” at the Museum of Contemporary Art of Los Angeles 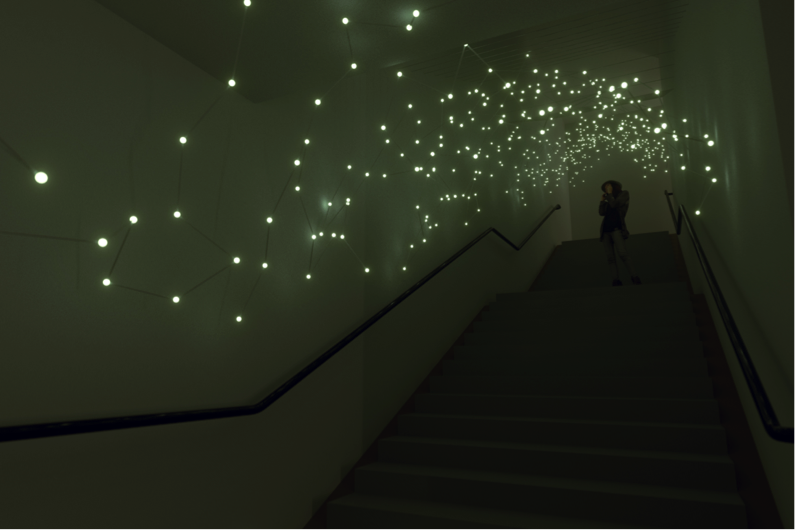 A well-known and influential Venezuelan artist, Fernández has built her practice upon the foundation of Latin American modernist abstraction that took root in her native country at the beginning of the 20th century. Fernández’s multidisciplinary work incorporates light, movement, and sound, following traditions established by renowned compatriot artists Gego (1912–94), Alejandro Otero (1921–90), and Jesús Rafael Soto (1923–2005).

Fernández’s artistic practice is deeply connected to the natural world, especially the tropical fauna and flora of her hometown of Caracas, as well as to formal modernist sensibilities. Her extensive background in graphic design—acquired as a student at the Instituto de Diseño Fundación Neumann, and later as a designer in the studio of minimalist Italian architect-designer A.G. Fronzoni (1923–2002)—has greatly influenced the visual, sensorial, and experiential aspects that distinguish her work. Art historian Julia P. Herzberg describes Fernández as “one of the most innovative exponents of contemporary geometric abstraction in the Americas.”

In the video 1pm006 (Ara ararauna) (2006), Fernández creates temporary disorder in an otherwise disciplined composition of vivid blue, yellow, and green geometric shapes abruptly shifting in concert with the strident sounds of the macaw, a tropical bird found in native Venezuela. 1pmS011 (2011), a video from the Mobile Paintings series, uses the sound frequencies of frogs, birds, and a crowing rooster to animate abstract geometric imagery. In this work, Fernández layers rows of white dots of varying dimensions over a black background to achieve a moiré effect. The video alludes to Jesús Rafael Soto’s early optical works, specifically Déplacement d’un élément lumineux (1954). Fernández’s installation 2i015 (Luciérnaga) (2015), created for this exhibition, activates the stairs leading up to the second-floor gallery. Reminiscent of fireflies, the flickering LED lights in this dramatic work will guide visitors through a darkened environment to create the effect of walking in an open field on a summer night.

The method Fernández uses to title her works is both scientific and intuitive. Each work that she makes within a specific year is numbered sequentially beginning with the numeral 1. Lowercase letters, as the second component of her titles, indicate the medium of the artwork; for example, e represents estructura (structure) and i stands for instalación (installation). Fernández also uses lowercase initials to designate particular series, such as pm for pintura móvil (mobile painting) or dm for dibujo móvil (mobile drawing). When referencing artists, she will include their initials; PM signifies Piet Mondrian and S is for Jesús Rafael Soto. The last three numbers of her titles indicate the year the work was completed; e.g., 006 for 2006 and 011 for 2011. Finally, scientific names of relevant animals are included in parentheses. As one becomes familiar with Fernández’s system, the titles and the process of decoding them offer a way to further engage with her constellation of ideas.

Magdalena Fernández (b. 1964, Caracas; lives and works in Caracas) has been featured in solo and group exhibitions at galleries and museums throughout the world, including Instituto de Canarias Cabrera Pinto, Canary Islands, and the Bronx Museum of the Arts, New York (both 2014); Museo Universitario del Chopo, Mexico City (2012); Haus Konstructiv, Zurich, and Muzeum Sztuki, Lodz, Poland (both 2010); and Cisneros Fontanals Art Foundation, Miami, and Museo de Arte Contemporáneo, Caracas (both 2006). In 2009, she represented Venezuela at the 53rd Venice Biennale.

Magdalena Fernández is organized by curator Alma Ruiz and The Museum of Contemporary Art, Los Angeles.

Additional support is provided by The Philip and Muriel Berman Foundation and The Venezuelan American Endowment for the Arts.