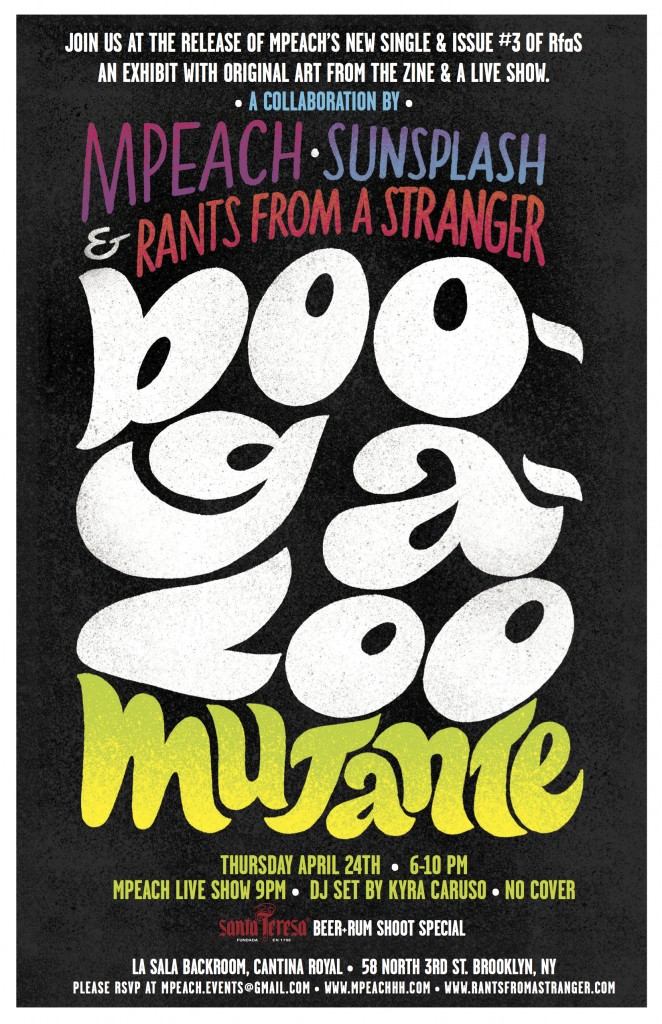 MPEACH releases new multimedia single in collaboration with Sunsplash and Rants from a Stranger.

During an intimate but energetic evening for the release of the new multimedia single “Boogaloo Mutante” by MPEACH in collaboration with Venezuelan star-producer Sunsplash and Rants from a Stranger, the Venezuelan vocalist, beatmaker and video artist will perform her blend of tropical big bass sounds, videos and fierce vocals.

While Rants from a Stranger will showcase original artwork and a macro size installation of RfaS Issue #3 special edition 18-page typographic Zine accompanying the song. This special release comes with a flexi record, a paper record player and the hand-numbered typographic Zine. Guests will be able to purchase this package of “Boogaloo Mutante” RfaS Issue #3 throughout the night and pre-order now at www.rantsfromastranger.com.

Dj Kyra Caruso will create the right vibe to enjoy the artwork and installation with a soulful set.

Boogaloo Mutante is MPEACH’S new song produced in collaboration with Sunsplash. For this single release Mpeach partnered up with Rants from a Stranger in a collaborative effort  to bring you this special release of a  Zine / Single Flexi postcard combo. All original artwork was created by Isabel Urbina Peña for Issue #3 of Rants from a Stranger “Boogaloo Mutante” with the lyrics of the song.

Showcase of original artwork & special installation by Rants from a Stranger

MPEACH aka Mariana Martin Capriles is a New York based Venezuelan multidisciplinary artist.

Her music is strongly influenced by a combination of Venezuela’s native ghetto-dance music (Changa Tuki), Afro-Caribbean beats and melodies rooted in traditional Venezuelan culture. She draws from a wide variety of electronic sounds and musical inspirations making for a dynamic sound that stands all on its own.

Her music and audiovisual art intersect and compliment each other, they are profoundly impacted by individual cultural roots while reconstructed to reflect her global internet-age upbringing. Mpeach is part of Dutty Artz roster of artists, and has completed installations at Bric Contemporary Art (Brooklyn, NY), One Art Space (New York, NY) and collaborated with the Joshua Light Show,  Latin Grammy Award Winner Los Amigos Invisibles and Tropical Bass party Que Bajo? As a member of the now disbanded cult electronic band Todosantos she’s opened for headlining acts such as M.I.A and the Beastie Boys, as well as performed at SXSW, Pop Montreal and CMJ festival.

Rants from a Stranger

Influenced by print, zines and comic books, comes this short publication that experiments with the idea of a ‘Graphic Novel’ without the presence of illustrated characters and relying solely on hand-lettering. Rants from a Stranger is a series of ‘Typographic Novels’ hand-lettered and written by Isabel Urbina while in Brooklyn, NY and Caracas, Venezuela.

Isabel Urbina Peña a New York born, Venezuelan bred designer at Random House in New York City. She has worked at C&G Partners LLC, American Museum of Natural History, Museo de Arte Contemporáneo de Caracas and for clients like Variety, Campari & Diner Journal. In 2012, she graduated from the Cooper Union’s Cooper Type Extended program in Typeface Design. Her original typeface Galea was awarded an honorable mention by the Fine Press Book Association (FBPA) and is featured in the book Playing with Type: 50 Experiments by Rockport Press.

For a love of music and the arts, Austro-Mexican Kyra Caruso came to the United States in 2005 to live her dream in one of the world’s most inspiring cities – New York. Internationally she’s been setting her mark as an eclectic, soulful DJ playing at venues from Mexico City, New York to Vienna and creating mixes for Freunde von Freunden to Recess New York’s Intermissions.