The Venezuelan American Endowment for the Arts is pleased to invite you to: 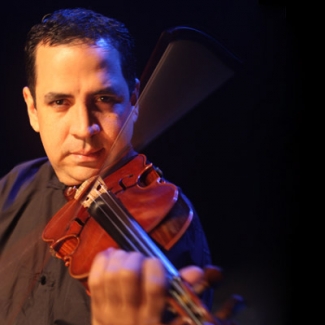 Eddy Macano is one of the greatest violinists and conductors of Venezuela. He is also recognized as one of the main exponents of the instrument across the continent. As a performer, Eddy is one of the first violinist of the Simón Bolívar Symphony Orchestra of Venezuela, a position which he has received the highest condecorations. As a soloist he has performed with the leading orchestras in the country, receiving the highest accolades. He has participated in national and international festivals in all the Latin-American territory as well in Germany, Spain, USA and London. He lived one of the highlights of his career when the teacher Sergio Bernal composed a concerto for violin and orchestra especially for him which is a joropo based on “El tamarindo”. This piece was released worldwide with the Utah Symphony Orchestra, USA, where Eddy Marcano received a long standing ovation. The press reviewed the best criticism heard around the continent. As a teacher, he has been working as a professor of the violins at the Simon Bolivar Conservatory of Music and the Emil Friedman School. He also served as President of the Nueva Esparta Symphony Orchestra Foundation and director of the junior Orchestra of the Montalban Academic Center. He has been musical commissioned as conductor and violin professor for the UNESCO and the OEA in the establishment of youth and children orchestras of Honduras, México, Uruguay Paraguay and Guatemala. With that experience he became a member of the UNESCO Venezuela’s Council of Music. He also served on the faculty of Andino conservatory of the CAF. Eddy Marcano has another musical dimension that finds inspiration in the Venezuelan folklore which make him a highly versatile musician. He is even considered one of the biggest exponents of traditional venezuelan music.

He has been a member on the agrupations Solo 3, Opus 4, Arcano and Onkora. He also has edited two solo albums under the project named “Venezuela en violin”. He is Currently working on the third volume of this series, which are to show to the public the various sounds of the country where the violin is the lead instrument. In May 2012 he released his rst DVD: Entre Compai’s, which features world class artists such as Francisco Pacho Flores and Rafael El Pollo Brito. In the 2008 debut in New York in the Latin American Festival Week run by Plácido Domingo, Paquito D’Rivera and Polly Ferman, including concerts at the Americas Society. This venezuelan violinist is experimenting with the symphonic rock music as a violinist thanks to the group “Sibelius” in concerts at the Cultural Center Corp Banca and the Mozart´s Auditorium of the Emil Friedman School. He was also the conductor of the rst concerto for electric guitar and orchestra that was made in Venezuela, performed by Sibelius and the Chacao Youth Symphony.

As conductor of orchestras he has studied with maestros like José Antonio Abreu, Pablo Castellanos, Sergio Bernal and Ulyses Ascanio. He also has been conductor of the most important orchestras in Venezuela. His trajectory as a conductor is so prominent that in recent years has been invited to lead and to give lectures and master classes in countries like Colombia, Panamá, Paraguay, Uruguay y Guatemala. Marcano developed an important production with the DAPA Foundation in Houston along with the first ballerina María Fernanda Urbaez. With this project he spread to Venezuela the Ibero american symphonic dance with the support of FUNDAMUSICAL Simón Bolívar, the System of Children and Youth Orchestras of Venezuela.

Eddy Marcano did a major U.S. tour in October 2009, facing one of the highlights of his career when he received a standing ovation, after his performance at Carnegie Hall in New York, one of the most prestigious music venues around the world. He also did a live recording at Americas Society. The venezuelan violinist performed with Gustavo Caruci on guitar and musical direction, Hector Molina in the cuatro and Jose Puente in the bass. This tour included the cities of Houston, New York, Washington and Pittsburgh. In the latter city he received a proclamation from the governor of Pennsylvania as a latin recording artist in commemoration of the Hispanic Heritage month in the U.S. He currently serves as the Artistic Director of the Simón Bolívar Conservatory of Music. “Eddy Marcano, is one of the most prominent figures in the new musical generation of our country… coupled to its unique human condition, high sense of professional responsibility and genuine artistic vocation, devoted to it as one of the greatest and most visionary leaders of the musical process in Latin America “. Maestro José Antonio Abreu Founding Director of the National System of Youth and Children Orchestras of Venezuela.